Home Move Blog Sites that must be seen in Dublin

Dublin is the capital and largest city of Ireland. It is also one of the most beautiful cities in Europe and a popular touristic hot spot. Here are five landmarks that you must absolutely visit during your trip to the Irish capital.

Constructed during the early 13th century, Dublin Castle is presently a major government complex. The structure spreads over an area of 44.000 square meters and is situated at an elevation of 9 metres. The castle is arguably the city’s most famous and visited tourist attraction. It is also the site of the inauguration of the presidents of Ireland. The edifice is adjacent to Dubhlinn Gardens, which is one of the capital’s most prominent green spaces.

Founded in 1877, the National Museum of Ireland is the country’s largest and most visited exhibition venue. It is dedicated to natural history and the evolution of Irish culture and art. The museum displays an immense collection, which comprises of approximately four million items. The venue has four branches, of which three are situate in Dublin:

Almost 800.000 people visit the gallery on an annual basis.

The Trinity College Library is perhaps the most beautiful athenaeum in the world. It serves the University of Dublin and Trinity College, and according to the latest numbers houses a collection of about six million volumes. The library’s most valuable item is the Book of Kells, an illuminated manuscript Gospel book in Latin that is believed to dates back to the 9th century. The athenaeum is open to the public, but has controlled touring hours to non-student visitors during the periods of final exam preparations. 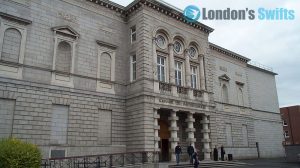 Located on Merrion Square, one of the city’s most picturesque Georgian garden plazas, the National Gallery of Ireland was established in 1864. The venue showcases a rich collection of Irish and European artwork. Some of its most illustrious exhibits are “Judith” by Andrea Mantegna, “Ecce Homo” by Titian, “Scene on the Ice” by Hendrick Avercamp, “Fisher Boy” by Frans Hals, “Portrait of a Woman with Gloves” by Rembrandt and many more. The museum is situated in the central parts of Dublin, which is also among the capital’s most desirable residential areas. This is proven by the fact that numerous people relocate to the neighbourhoods around Merrion Square by using licensed removals to Dublin by London’s Swifts.

Formally known as The Cathedral of the Holy Trinity, this religious edifice was founded during the first half of the 11th century and is the older of the two medieval cathedrals in Dublin, the other being, St. Patrick’s (est. 1192). The church’s underground crypts are perhaps its most notable features. The tombs have been a pilgrimage site since medieval times and are among the oldest structures in Ireland. Both the cathedral and its crypts are open to the public.